Santa Clara County has moved back into the purple tier of coronavirus restrictions, indicating widespread transmission. Here’s what you need to know.

Schools that are currently open — such as elementary schools in LASD and PAUSD — will be allowed to continue in-person instruction. However, schools that have not yet begun an in-person return — such as PAUSD and MVLA high schools, as well as MVWSD schools — may not open until the county remains in the red tier for at least two weeks. Schools not yet open can apply for a waiver from the County Health Department to bring back grades TK–6.

Under the purple tier, restaurants will have to return to strictly takeout or outdoor dining models. Bars and breweries that do not serve meals will remain closed.

Other operations that will continue to be allowed to operate, some with modifications, include hair salons and barber shops, retail stores and malls, outdoor museums and zoos and essential businesses. 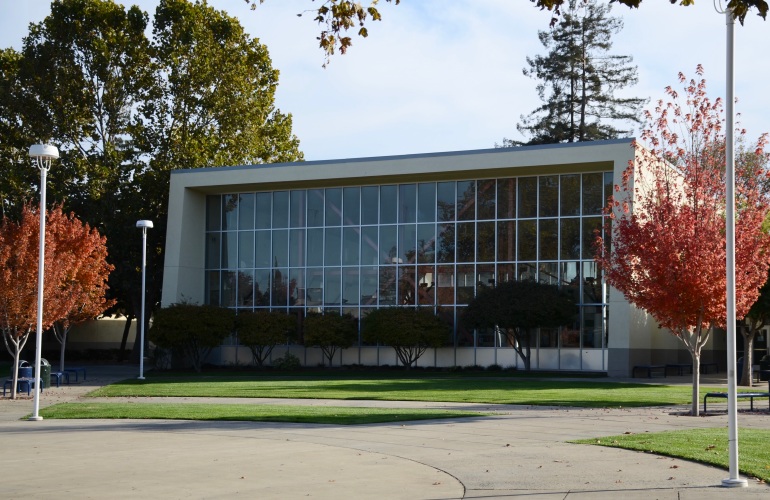 Mountain View–Los Altos District administrators presented three potential models for in-person return, including “rotation,” “week-on/week-off” and “AM/PM,” at tonight’s Board meeting. Superintendent Dr. Nellie Meyer noted that there is no set timeline for an in-person return, although the District had previously decided that any physical return would not take place before the second semester.

These recommendations come as the county sits in the “orange” tier of coronavirus risk, indicating moderate spread. Select groups of students — disengaged and special needs students, as well as English learners — have already returned to campus in small cohorts.

In a rotation hybrid model, half the student body would attend in-person instruction on Monday and Tuesday, and the other half would attend on Thursday and Friday; Wednesday would remain a remote day of asynchronous lessons for all students.

Faught noted that the size of the returning groups could be adjusted based on feedback and necessity — say, to a third or fourth of the student population at a time, as opposed to half. She suggested that the student body could be divided alphabetically.

The week-on/week-off model would see half the student body returning to campus for one week, with the other half rotating back on the next week. During their off-campus week, students would continue engaging in remote instruction.

Similar to the rotation model, Faught noted that the week-on/week-off model would provide students with more consistency and an experience more akin to typical on-campus instruction.

Under the AM/PM model, half of the students would attend in-person instruction in the morning, with the other half rotating on-campus at noon following the lunch break.

Faught pointed out that the noon rotation would require complicated commuting schedules for parents, making it difficult for some students to get to and from school.

However, Faught did mention the advantage that — with the exception of Wednesday, which would remain an asynchronous day — all students would be on campus every day, providing some sense of normalcy.

Faught did express concerns about having the entire student body eating lunch at the same time on campus. Trustee Fiona Walter suggested taking lunch in shifts, and Meyer noted that campuses may switch to a closed-campus lunch, meaning students wouldn’t be able to leave campus during their lunch break as per usual.

The proposals, nevertheless, did not come without criticism. David Campbell, the President of the District Teachers Association for MVLA, heavily criticized the three proposals as unsafe and impractical.

“None of the models presented to staff received an overwhelmingly positive response,” Campbell said, referring to MVLA staff members’ reactions to Meyer’s initial presentation to District staff. “To be honest, none of them were really liked.”

Campbell cited the fact that in a hybrid return, students would be exposed to peers in up to seven of their classes, increasing the risk of exposure levels. However, he voiced his support for the District’s cohort return, where select groups of students return to campus but come into contact with only their small group of about a dozen.

“I think where we would be successful is in expanding the cohort model — allowing targeted groups to return and maintain that,” Campbell said. “If you’re in cohorts, you’re going to have fewer people, but if you go back with a hybrid model you’re going to mix with other groups. I don’t want to take that risk with all of our health.”

Furthermore, he argued that teachers would not only be exposed to a high number of students, but would also be forced to plan both virtual and in-person lessons and face difficulties teaching to a split classroom.

“We are not in a safer place than we were when we locked down,” Campbell said. “A switch to hybrid just doesn’t offer the solution that it claims to provide — we’d be hosting our own super-spreader event.”

Campbell suggested that the associated student bodies at both Mountain View and Los Altos high schools find ways to host safe social events for students, but ultimately advocated to remain under a distance learning model for the rest of the year.

Meyer had previously argued that an in-person return would increase social and academic engagement, allow for more personal connection and give students more routine and structure to their day.

Campbell’s concerns were met with mixed reactions during public comment, where a handful of MVLA parents criticized his suggestion that the District continue distance learning. They argued primarily that their children were having a “hard time” with the limited social interaction.

Community members expressed continued dissatisfaction with what they referred to as a lack of transparency from the District, urging administrators to consult with parents before moving forward with decisions regarding the return.

Meyer proposed a “cyclical” structure of communication and feedback for the hybrid return, involving the review of the administration, staff, students and families before settling on a final decision. Furthermore, she reemphasized that the decision will also be guided by considerations from the public health department as well as state and county guidelines.

“Going straight from distance learning to a full return would be very difficult,” Meyer said. “We’re looking at how to best transition; we don’t know when that will happen yet, but we do want to make sure we have plans in place for when it does happen.”

Meyer, along with LAHS Principal Wynne Satterwhite, cited relationship-building with students as the primary purpose for the full-time officer, seeing as the LAHS campus is already “very safe.”

The police task force subcommittee, created in mid-October, is set to provide the City Council with final recommendations regarding reforms to the SRO program and citizens’ complaint process on Tuesday, November 24.

“The SRO program is about helping students make better choices, not getting them in trouble,” Satterwhite said. “They know the students even better than us sometimes — it’s a really nice relationship in that sense.”

Currently, only one SRO is assigned to the campus, and that officer is not present unless upon request by the school administration. According to Meyer, the current officer is spread “very thin” across campus and thus isn’t able to build relationships with students.

Not all LAHS staff agreed with Meyer and Satterwhite, however.

“As both a former student and a current teacher, I don’t think I’ve seen a case where an SRO helped solve a problem,” English teacher Michael Smith said. “They just escalate the situation even more.”

Social studies teacher Margaret Blach asserted that SROs are “ineffective in every capacity,” as they could be the “least racist cop” but still represent an institution disconcerting to students.

Meyer, on her part, emphasized campus safety as the foremost goal of the SRO program, followed by the development of student relationships. In fact, she said that the administration’s expectations regarding campus safety were “met or exceeded” by the SRO program “95 percent of the time.”

Task force members pointed out that this contradicted previous statements.

SROs are not present during the majority of the administration’s disciplinary actions; however they may be present if arrest is a possibility, and they’re also able to seek out students on campus for interrogation concerning off-campus incidents.

Additionally, SROs often participate in wellness checks at “at risk” students’ homes, which are evaluated based on chronic truancy and academic performance; they also help transport students or contact their families during crises.

“While we are aware that the administration is just one perspective, our relationship with the SROs has been one where goals are met,” Meyer said, when asked if she’s satisfied with the program.

“No matter how good the intent is, negative outcomes should still be addressed,” task force member Moira Huang said.

Task force members brought up the “problematic” experiences of three Black alumni with LAHS SROs, who expressed discomfort coming forward during their time at LAHS, believing that the “administration was with the SROs.”

Although these events occurred eight years ago, task force members claimed that the issue still exists — students are simply still not coming forward.

With regard to demographics, Meyer revealed that Latino males are especially affected by disproportionate disciplinary rates.

In addition to existing implicit bias training, the MVLA Board is set to approve mandatory anti-bias training for all staff next Monday, November 9, to alleviate racial disparities.