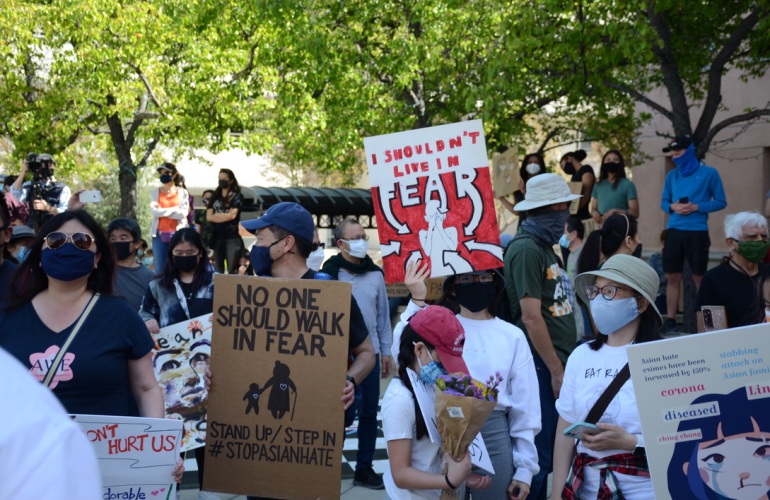 Hundreds of protesters marched through downtown Mountain View today in support of the Asian American and Pacific Islander community in a local show of solidarity amidst rising anti-Asian hate crimes nationwide.

“Our focus is to spread cultural awareness of the presence and long-standing racism against AAPI people in this area and also to combat, to spread activism and to protest the recent events that have been happening,” Kemp said in an interview prior to the rally. “Really trying to get the point across that AAPI racism has been here since Mountain View was formed.”

Less than a hundred years ago, in the very spot where protesters gathered today to rally against Asian American hate, Japanese Americans were processed at what is now the Mountain View Caltrain station and shipped off to internment camps in an effort to forcibly remove them from the Bay Area during WWII.

In 1862, supporters of the Anti-Coolie Act, which aimed to “protect” white people from job competition with Chinese immigrants by becoming the first immigration legislation in the U.S. to target a specific ethnic group, marched down the same streets as the protesters did today.

During the march through downtown Mountain View, one of the protesters, Ping L., who requested her last name not be used, shouted out chants such as “Stop Asian hate, stop all hate” and “no more violence, no more silence” as she and her family marched down Castro street in the stream of protesters. The crowd around her echoed her cheers and outdoor diners clapped and whistled as the protesters marched by.

“Initially we were just here to join the rally, but it was too quiet,” she said. “We need to let people know what we stand for, so I wanted to make our voices heard.”

As she caught her breath from shouting slogans, she added that to her, the rally was a place to let out all of the anger and frustration that many Asians feel, unite as one community and be a role model to her son.

“I have my boy standing behind me, I have to set the example of fighting justice and fairness,” Ping said. “I feel like it is ridiculous that this is happening in America, the land of the free and the home of the brave, that we have to request our basic right to safety.”

Like many other speakers, she shared the fear that she or someone she knows could be the next victim of AAPI violence. In fact, all of the youngest speakers, who were eight to 10 year olds, expressed their constant fear of going outside.

“I am scared and sad about the cycle of hatred,” 10-year-old Ray H. said. “No one wants to be the next victim.”

“I was always told I was a happy sunshine kid, but not anymore,” 8-year-old Michael P. said. “Children should not be afraid to go outside.”

The rally had a large emphasis on youth leadership and participation, with both Ray and Michael among several students from ages eight to 18 standing in front of the crowd and sharing their perspectives.

The rally began at 2:30 p.m. when protesters gathered at the Mountain View Transit Center to make signs before beginning the march to the city hall at 3 p.m. Many signs read “#StopAAPIHate,” “Racism is a virus, unity is the cure,” “I am home” and “Not your model minority.”

Despite its impressive lineup, Kemp said that the planning process only began about a week prior to holding the rally and that the committee pulled it off by immersing themselves in the planning.

Working with Kamei, among many others, the youth chairs signed up all of the speakers, the musical performance from San Jose’s youth singing group Able to Shine and a few informational tables that were aimed at increasing the interactivity of the rally.

Kamei — whose father was born in the Heart Mountain Japanese internment camp and whose mother is Chinese-Puerto Rican — said that as someone who always had to check the “other” box when it came to identifying her race, to her, today’s rally was about coming together, sharing experiences, and showing solidarity as a community.

“There isn’t just one Asian American experience,” Kamei said in an interview prior to the rally. “So I think today will really be key in trying to understand the wide ranging perspectives that people have on this topic and how it affects them and I hope people can hear about how we can all be better allies for each other.”

As the youngest of the youth chairs and someone who has not experienced overt acts of racism, Shan said that he was at first unsure what he could contribute to the rally, but soon realized that not everyone in the crowd would have had these experiences either.

“We are here because our community was attacked,” Shan said. “You as youth have a voice and there are people who will stand behind you.”